A brief introduction about Hiatal hernia 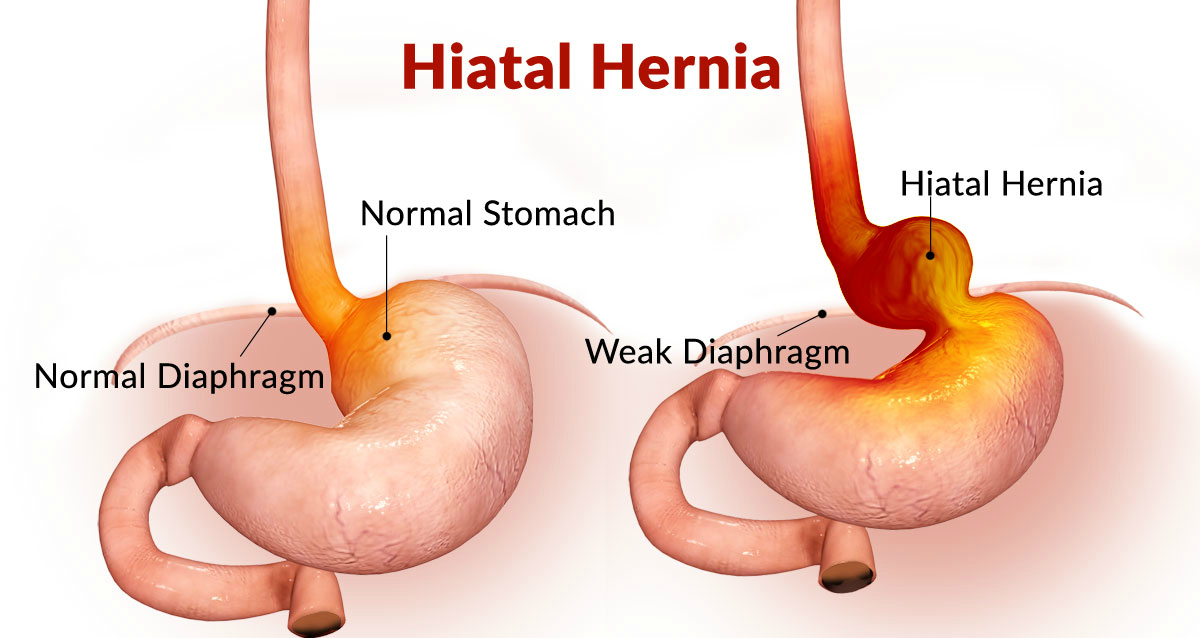 HERNIA IS A MEDICAL CONDITION IN WHICH AN INTERNAL ORGAN BULGES OUT OF THE BODY. THESE PROTRUSION DOES NOT GO AWAY ON ITS OWN AND LAPAROSCOPIC HERNIA OPERATION IS NEEDED TO CORRECT IT. THESE ARE OF FOUR TYPES AND WE ARE GOING TO UNDERSTAND ONE OF THE TYPE CALLED HIATAL HERNIA.

Hiatal hernia arises, when a portion of the stomach bulges out of the diaphragm into the chest. The diaphragm is a sheet of muscle between the chest and abdomen. It helps us to breathe by expanding and contracting. It also separates the organs of abdomen and chest. Ideally the diaphragm lies beneath the lungs and above the stomach, but the people who suffers from hiatal hernia, experiences a protrusion of stomach through the diaphragm. This opening site for hernia is called hiatus.

The exact reason for developing hiatal hernia often remains unknown. A previous injury or presence of weakened tissues may be contributing factors for the same. It is also highly associated with aging. Activities that exerts excessive pressure on the stomach region may also induce hiatal hernia, such as vomiting, coughing, lifting heavy things and persistent straining while passing bowel.

Moreover, few people are born with larger hiatus, which acts as a additional factor to develop hiatal hernia as the mobility of stomach through diaphragm becomes easier. Several factors such as aging, smoking and obesity elevates the chances of suffering from hiatal hernia.

Though few patients does not experience any particular symptoms. The most common symptoms associated with hiatal hernia are as follows

These symptoms are caused when the bile juice or air enters into the esophagus.

There are two types of hernia, namely fixed hiatal hernia and sliding hiatal hernia. Let’s get a brief idea about these.

It is also known as paraesophageal hernia and is quite uncommon. In this type, a part of stomach pushed through the diaphragm and remains there. Generally these does not possess any serious threat, but in certain cases, the protruded part becomes strangled and may causes serious damage. Laparoscopic hernia operation is done to overcome it.

Most of the cases falls into sliding hiatal hernia. In this condition, the stomach moves in and out of the diaphragm, through the hiatus. These are generally small and does not produce any serious threat. Several people spends a lifetime without treatment.