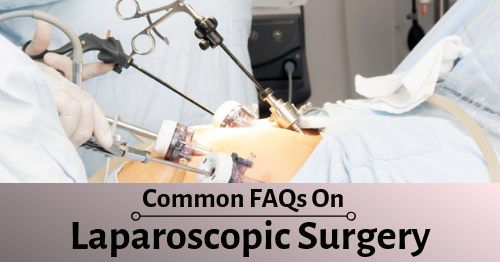 Common FAQs On Laparoscopic Surgery You Should Know

For years Laparoscopic surgery has been gaining major popularity amongst doctors and patients. It is also known as the ‘minimally invasive’ surgery. It is performed by making small incisions in the abdomen with the laparoscope instruments, along with the high definition video camera, which helps to see the inside the abdominal cavity and it’s nearby organs.

Here we gathered some frequently asked questions by patients, along with their factual answers.

1. Is laparoscopic surgery a safe procedure?

2. What are the benefits of laparoscopic surgery?

3. What are the side-effects/complications associated with this surgery?

Ans: After the surgery, you may experience some of the following side-effects:

However, they are kind of rare and can be treated easily with mild medication, if needed.

There are no complications associated with laparoscopic surgery.

5. When shall I consult the doctor after surgery?

Ans: You should stay in touch with your doctor to help him keep a track on your recovery. However, you should seek your doctor immediately, if you develop any of these complications-

Hope we helped you with these questions. We have collected more FAQ’s related to laparoscopic surgery. Stay tuned for the next part.

Read Also: How To Prepare Yourself Before Going For A Laparoscopic Surgery 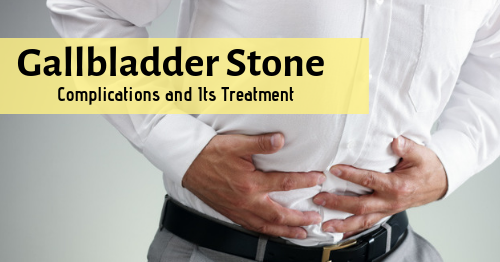 Complications Of Gallbladder Stone And Its Treatment

Gallbladder stone is a very common problem nowadays. Thus, it comes as no surprise that the number of people seeking gallbladder stone surgery these days, is on the rise. While some of them have no symptoms regarding the gall stones, some suffer severe pain and discomfort. These annoying symptoms can be managed effectively with diet and medications.

However, gall bladder stone surgery is usually the only treatment for the same. If left untreated, it can bring some complications. Some of them are gall bladder inflammation, infection of the bile ducts, acute pancreatitis, and gall bladder cancer (rarely). Let’s explain them one by one, in brief-

It is also called acute cholecystitis. It happens when the bile starts to secrete in the gall bladder. It onsets when the stones prevent the bile from secreting into tubes and causes inflammation in the bladder.

For mild inflammation, the doctor may prescribe medicines and antibiotics to prevent the infection from spreading further, but in severe cases, the doctor may suggests Gall Bladder Stone Surgery to remove the gallbladder altogether.

Infection Of The Bile Ducts:

It is also called Acute Cholangitis. It happens, when the bile ducts become blocked and bacterias start to grow in the ducts and cause infection.

Pancreatitis is a severe disease. It happens when a stone set in the bile duct and blocks the opening of the pancreas. The digestive juice, which is produced in the pancreas becomes unable to drain and leads to pancreatitis. It causes severe inflammation in the pancreas and also it can be life-threatening if not treated in time.

It requires immediate hospitalization, so the doctor starts the treatment with intravenous fluids, antibiotics, pain killer, etc to stabilize the patient. After that, a thorough investigation and treatment of the underlying conditions begin.

Though it is rare, it is a very serious complication of gallstones. This rare complication gets more serious and a likely scenario, if you have a family history of gallstones or have too much calcium in your gall bladder.

Gall Bladder Surgery must be needed even if your gallstones aren’t causing any symptoms. It is the only way to prevent the possibilities of any unwanted medical complications. These days, gall bladder operation has become even more effective and safer, without any complication through laparoscopic surgery. 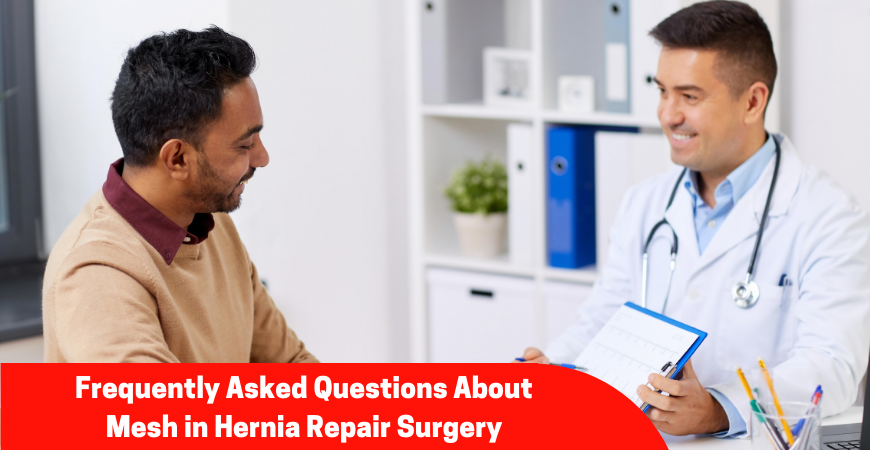 FAQ’s On Mesh In Hernia Repair Surgery By Patients

Hernia surgery can be done in two ways, open surgery and laparoscopic surgery. As there are different kinds of hernia, a surgeon might take different approaches to repair the hernia effectively. However, almost every expert doctor prefers laparoscopic hernia surgery for ensuring the maximum benefits of the patient.

Nowadays, ‘Hernia Mesh’ is a product commonly used in hernia repairs. Surgical meshes, in particular, the ones used to repair hernias, have been in use since 1891. Yet there are many doubts regarding the same, till this day.

Today, on behalf of Varanasi Hospital, we answer some frequently asked questions about mesh in hernia repair surgery.

Surgical mesh is a medical instrument that is used to provide extra support to the weakened tissue or damaged tissue. The mesh looks like a flat, grid-like structure which is mainly used to cover the hernia surgery incision. There are two types of mesh, which are made from either synthetic material and animal tissue. The surgeon decides which type, depending from case to case.

How Does It Work?

Mesh fortifies the tissue around the hernia. Surgeons joint the mesh or staple them after repairing the hernia. Over time the tissues grow around the mesh and secure the repair, mitigating the recurrence of hernia in the future.

Does Hernia Surgery Require A Mesh?

A hernia can be repaired without a mesh if it’s a small one. Mainly a small can be repaired with just a suture. However, if hernia left untreated, it often grows over time, which cannot be treated with the only suture. Then it often requires a surgical mesh for a successful repair.

What Are The Advantages Of Using Mesh?

Previously, the hernia used to be repaired with suturing, quite successfully. But in many cases hernia recurred again and again, as the incision acts as a weak spot in the abdomen. But the usage of hernia mesh in surgery has changed that for good. It minimized the risk of the hernia recurrence.

Will It Cause Any Problem In The Future?

Surgical mesh is a foreign body, which is being placed in your body through hernia surgery. After surgery, it may get contaminated and cause swelling, redness, and irritation. But it has been found that mesh infection mostly occurs due to the usage of low-quality mesh. The best hospital, on the other hand, provide the best quality surgical mesh and lowers the chances of any such infection.

When a Mesh Is Required, Which Will Be The Best Surgery Procedure?

It depends on the patient’s condition and the doctor’s recommendation. However, experts surgeons, mostly prefer laparoscopic surgery, as it provides quick recovery without any complications.

Hope we helped you with our answers. We will be back soon, with more questions regarding surgical mesh, so stay tuned for the next part. 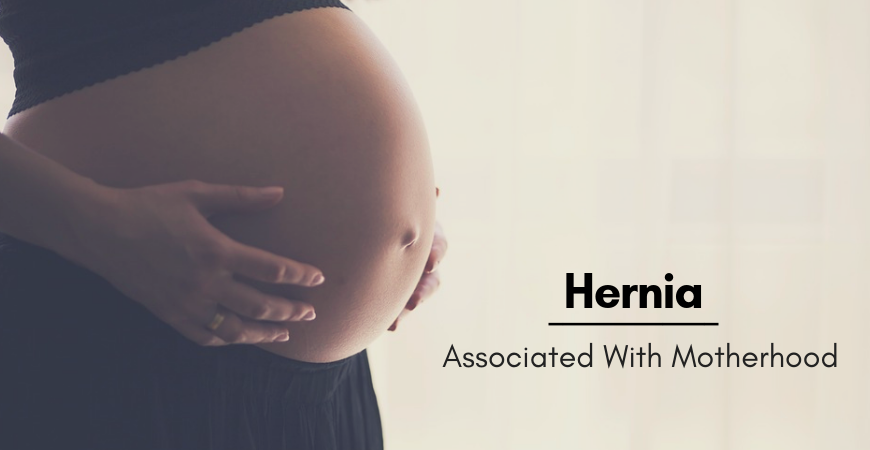 Reasons Why Hernia Is Closely Associated With Motherhood

As we are observing Mother’s day this month, we are sending our tributes to all mothers’ along with spreading more awareness on hernia, a condition mothers mostly suffer after and before childbirth.

A hernia is a medical condition, which happens when a portion of an internal organ budges out through an abdominal opening. A hernia is very common amongst both men and women. However, pregnant women are highly susceptible to it. Thankfully, this condition can be resolved through hernia surgery.

Though hernia may not show any symptoms, often it can be found to be very painful for certain individuals. Let’s get to know how hernia is associated with motherhood.

During pregnancy as your belly grows and stretches, the pressure on the abdominal wall starts to increase. Your abdomen gets pressurized significantly as it needs to carry the baby’s weight. Thus, the abdominal tissues get weaken due to immense load and it tears apart the membrane, making a hernia bulge out.

All pregnant women are at risk, but during pregnancy, the risk of hernia gets even more obvious, such as-

1. If you are expecting twins or more.

2. If you are obese or overweight.

3. If you had abdominal surgery previously.

4. If you had a previous C-section

If you diagnosed with a hernia during pregnancy, the doctor may suggest a C-section. This is done because, during normal delivery, a hernia can budge out, while the mother needs to put a lot of pressure on their abdomen to push out the baby. Though it is rare, this condition may arise.

Does It Hurt The Baby?

No, the baby won’t get hurt by the hernia as he/she grows up in the uterus. But you need to consult with your doctor immediately if hernia occurs in this condition.

Though every mother is at the risk of having a hernia in the future after childbirth, several factors might uplift the chances even more, such as

1. Being Obese or overweight.

2. Coughing and sneezing too often.

4. Having any Previous abdominal surgery.

If you feel a soft lump in your abdominal or groin area during or after your pregnancy, you need to consult a doctor immediately. If left untreated, it can cut off the blood supply, damaging your intestines. Thankfully, hernia surgery can resolve hernia permanently.

Read also : How To Recover Faster After An Inguinal Hernia Repair?