Watch Out For These 5 Signs Of Appendix Burst

Home Health Watch Out For These 5 Signs Of Appendix Burst 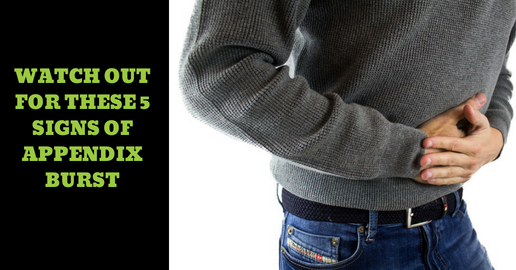 Normally in cases of appendicitis, the organ doesn’t burst in the primary stages. However, in case this condition is ignored over time, it can definitely burst out of the blue. Thus it’s always recommended to get an appendix surgery well before this emergency arises.

Here we list some warning signs that you might have to admit yourself into the ER due to untreated appendicitis.

The pain of appendicitis spreads from the belly to the right abdominal side. If you feel pain while walking, going over a bump in a vehicle or while coughing, your appendix might be on the verge of bursting.

The inflammation can sometimes lead to feeling nauseous and vomiting. Thus, if you’re feeling the same accompanied by loss of appetite for a while, things might not be going well with you inflamed appendix.

Your bathroom breaks are more frequent than usual:

Appendix in some people is located near the pelvic floor, making it add pressure to the bladder.

So when the bladder come into contact with the inflamed appendix. Often the bladder does not empty in one go and thereby it causes irritation too. It makes you feel you have to go pee frequently.

You have a fever:

Whenever there is any inflammation in the body, the autoimmune system responds by sending a chemical signal to the brain. As a result, we experience fever or even chill. So, if you feel chill and fever, without any other apparent cause, it’s possible it is because of the severe inflammation in the appendix.

In case you’re experiencing two or more of the above-mentioned symptoms along with feeling disoriented, it could indicate severe appendix infection. There is also a chance that infection might have entered the bloodstream. This will lead to affecting the oxygen level in the blood eventually.

Although the symptoms vary from one person to other. If you’re experiencing at least two to three of these above-mentioned symptoms, go for a screening to be on the safe side.