Gallstones: A Recurring Problem And Its Ultimate Solution

Home Health Gallstones: A Recurring Problem And Its Ultimate Solution 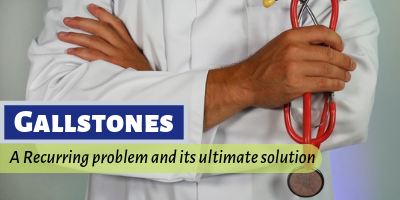 Gallstones are one of the most common digestive problems in men and women. Almost 15% of the population of India has gallstones. Many times a person with gallstones don’t realize at all unless ultrasound scans are done. These are called silent gallstones, as they project no symptoms. However, most of the time, there are a lot of painful symptoms that are associated with gallstones, particularly as their size increases. Pain in the abdomen, nausea, vomiting are some of the symptoms of gallstones. The major way of treating gallstones is Laparoscopic gallbladder surgery.

Sometimes, the non-surgical treatments do not remove the gallstones properly in one go either. Many of these treatments, like acid pills or shock waves, requires multiple therapy sessions. Now, this might not seem like a problem in the initial stage but later on, they become more complicated as they get bigger.

Another reason for removing your gallbladder is to avoid the possibility of its recurrence. A person can easily live without their gallbladder as the liver can produce enough bile necessary for the body.

If you opt for medication and not surgery, the only way to stop the recurrence of gallstones is life long medication, which is more expensive and might have side effects of their own.

Another side effect of the recurrence of gallstones is gallstone cancer. If these bile stones keep forming again and again and are not treated properly, it can cause chronic inflammation. This may lead to gallbladder cancer at a later stage.

Thus, most doctors recommend laparoscopic gallbladder surgery, as this does not have much long term side effects and can be easily performed. Just like any other laparoscopic surgery, only 3-4 small incisions are made and the gallbladder is removed. Unless and until you have some medical conditions, and the doctor does not recommend surgery, it is best to avoid non- surgical treatments and prefer surgical treatment.

So, if you have gallstones that are causing pain, it is best to undergo laparoscopic gallbladder surgery and lead a healthier life ahead.